Diwali is the festival of lights, it spiritually signifies the victory of light over darkness, good over evil, knowledge over ignorance, and hope over despair. It is is celebrated by Hindus, Jains, and Sikhs and some Buddhists. This year Diwali falls on Tuesday, November 6th, 2018.

"Thousands of candles can be lighted from a single candle, and the life of the single candle will not be shortened. Happiness never decreases by being shared." Buddha

Deepawali or Diwali is certainly the biggest and the brightest of all Hindu festivals. It's the festival of lights (deep - light and avail - a row, a row of lights) that's marked by four days of celebration, which literally illumines the country with its brilliance, and dazzles all with its joy. Each of the five days in the festival of Diwali is separated by a different tradition, but what remains true and constant is the celebration of life, its enjoyment and goodness.

Diwali is a five-day festival in many regions of India, with Diwali night centering on the new moon - the darkest night - at the end of the Hindu lunar month of Ashvin and the start of the month of Kartika. In the Common Era calendar, Diwali typically falls towards the end of October, or first half of November each year. This year Diwali falls on Tuesday, November 6th, 2018.

Historically, the origin of Diwali can be traced back to ancient India, when it was probably an important harvest festival. However, there are various legends pointing to the origin of Diwali. Some believe it to be the celebration of the marriage of Lakshmi with Lord Vishnu. Whereas in Bengal the festival is dedicated to the worship of Mother Kali, the dark goddess of strength. Lord Ganesha, the elephant-headed God, the symbol of auspiciousness and wisdom, is also worshiped in most Hindu homes on this day. In Jainism, Deepawali has an added significance to the great event of Lord Mahavira attaining the eternal bliss of nirvana. Diwali also commemorates the return of Lord Rama along with Sita and Lakshman from hisfourteen-yearong exile and vanquishing the demon-king Ravana. In joyous celebration of the return of their king, the people of Ayodhya, the Capital of Rama, illuminated the kingdom with earthen diyas (oil lamps) and burst crackers. 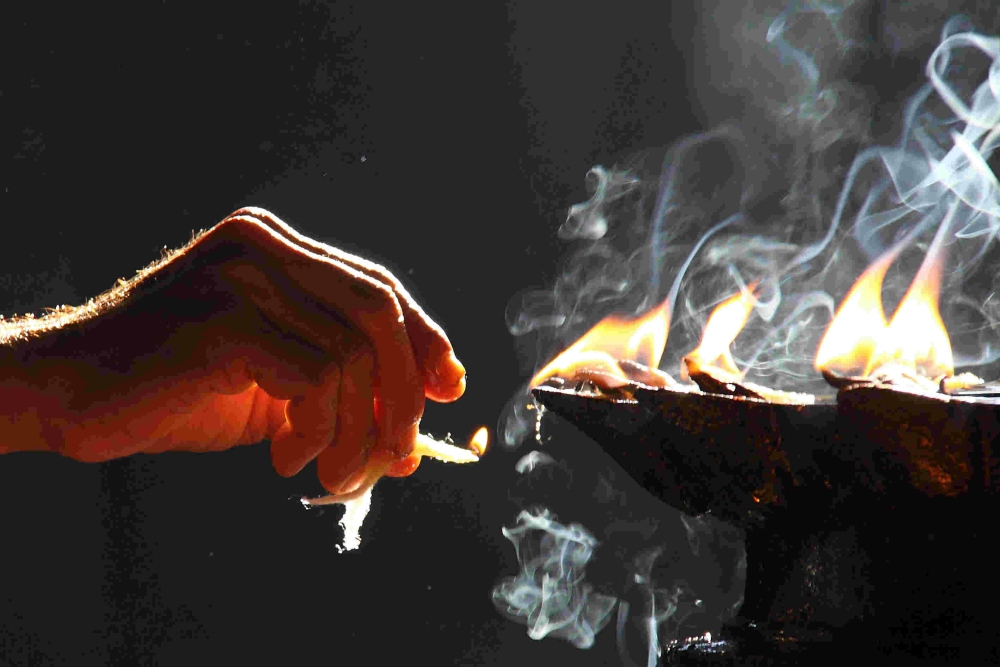 "Someone may do the work. Someone else may get the credit. In an oil lamp it is the wick and oil which burn, but we give credit to the lamp."

WHAT IS THE DEEPER MEANING OF THE DIWALI OIL LAMP? SWAMI CHIDANAND SARASWATI SAYS:

"In life also this happens. There are always those who get the credit, those who are always in the center receiving the appreciation and reward, while those doing the real work frequently find themselves in the background. This should not bother us. We must learn to be like the wick and the oil of the lamp. Just keep burning and bringing light to others. Don't worry whether people acknowledge you properly or not. Whose name gets the credit is not what's important. What's important is that light has been brought to the world.

However, when we find ourselves in the position of the wick and oil, feeling like we do all the work and not getting the credit or appreciation, what do we do? We sulk. We complain. We grumble. This is not the divine way and it is not the message of Diwali. As we watch the Diwali lamps burn, bringing beautiful illumination, we must take the message that all parts of the lamp are crucial. If there were no oil, or no wick, or no clay pot in which to hold them, there could be no flame. Each part is essential and of equal worth. No one is small and no one is big. In our lives as we work to bring light to our family, our communities and our world, let us worry less about who is doing what and who is getting credit and let us worry more about whether we are being the very best wick, the very best oil and the very best pot we can be.

Another message to be taken from the lamp is that it burns for others, with no selfish motivation and no expectation. The sole purpose of an oil lamp's existence is to bring light to others. They burn 'for' others, with every minute, every moment of their lives and every ounce of their existence. We also burn. But we burn 'from' others rather than 'for' others. We burn with anger, jealousy and frustration. The heat is on, but rather than bringing healing, it brings hurt, to ourselves and to others. The flames of our internal fire engulf us, suffocate us and burn the very core of our beings. We must learn to burn 'for' others rather than 'from' others."

Ajay met his true passion in photography when he started traveling around Kerala, where nature is at its best. With his eye for detail he captures moments without losing its real essence, in a way of his own.

A journey in to an ancient world of India, divided in 10 short-films. It was not only a journey to India but more a journey in to another world. For some reason I was literally falling in to an unknown world touched by all that beautiful things going on in this world.

Deities associated with sacred forests transformed and evolved according to different historical eras. It is believed that the main original forest deity was Mezguasche (Forest-lady). Mezguasche was responsible for the forest and fauna.

Rishikesh, a town in the foothills of the himalayas. It's a pilgrimage place since thousands of years, where the yogi's gather before they continue their journey in to the mountains on their path to the ultimate liberation.

Since time immemorial, the Circassian native tribes did not follow a script or a holy book, nor erected praying temples, but rather, they have formed an unwritten philosophy based on their collective outlook on life, and worshiped in the arms of nature.

Trees stand as a magnificent reminder of one of God’s infinite masterpieces, they are like the silent observers of time, wordlessly conversing with life as eons go by. Trees can be regarded as the wardens of earth, unconditionally giving life, sustenance and shelter.

Found on the busy colorful streets of walled city of Jaipur, are two men who are proudly preserving three eras of photography with their 1860s Carl Zeiss camera, Surendra Kumar and his brother and Tikam Chand. The camera is a piece of history.